Does My Dog Look Fat?

When we adopted our dog, Sammy, he was overweight. I might have mentioned that he was an only pet of an elderly woman before we got him. She had to move to a nursing home. Otherwise, I'm sure she never would have given him up. One thing we noticed about Sammy immediately was that he did not seem familiar with dog food. When I'd put his bowl of food on the floor, he'd sniff at it and walk away. But when we sat down at the table for our dinner, Sammy would come over to the table and sit, looking up at us as if expecting a reward for his awesome behavior.

The first time I took him to the vet, the doctor brought out an illustrated chart titled "Canine Obesity." The skinniest possible dog was labeled 1, and the fattest possible dog was labeled 5. "Sammy is 4.5," the vet informed me. "He has probably been living on table scraps." I pictured lasagna and Oreos. He outlined the dangers of obesity in dogs: diabetes, heart disease, and shortened life span were among them. Sammy weighed 33 pounds; he should weigh 28, according to the vet. 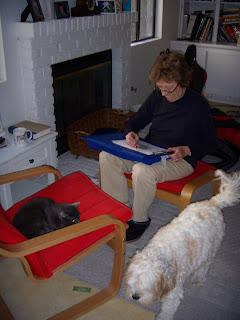 (That's my mom, drawing a portrait of one of our cats, as Sammy strolls by--on his way to the kitchen, of course.)

Five pounds are no biggie, right? Sammy went on a strict diet and exercise program. I measured his food meticulously, and we never EVER gave him human food. I walked him twice a day. This was more complicated than it seems. He had never walked on a leash before. At first, about every half block, he stopped, lowered his head, and planted his splayed feet firmly on the sidewalk. "Aww," passersby would comment, "Puppy wants to go home. Puppy's tired." I'd snap the leash and say "Ch!" just like Cesar Millan on The Dog Whisperer, and eventually, Sammy would follow me . . . for 20 yards until he stopped again. When we got home, even if we'd only managed half a mile, Sammy would pant and puff for several minutes. I kept it up, though. I was relentless. At first, it wasn't much fun for either of us. Diabetes, heart disease, shortened life span, I reminded myself, forcing us both out the front door.

There were a couple of diet setbacks. Once I found him standing on my son's bed, devouring a left-behind chocolate chip muffin. Another time, I caught him trotting down the hall carrying a white MacDonald's bag in his teeth. But for the most part, he stuck with the program. He had no choice.

After a month, he had to go back to he vet again (ear infection), and I worried that I'd find out I was starving and overexercising him. The weight drop would be dramatic, I imagined, after all of my hard work, and the vet would admonish me to ease off. Sammy was down by half a pound. "Good job, Sammy!" the vet said, high-fiving his paw. "Keep it up!" Half a pound?! I thought. Is that all?

As more time passed, Sammy's walks improved. After 3 months, he actually got used to walking on the leash. Now I could easily take him 2.5 miles twice a day. (Note that this took considerably longer than the 5 minutes it takes Cesar with even the most difficult dog on TV. What's up with that? Must be my pronunciation of "Ch!") On the weekends, my husband walked Sammy 3 miles in the morning and the kids each took him on a shorter walk during the day. He ate dog food and lay down in another room while we ate dinner. We started to see a slight indentation between his ribs and his hips at his "waist." After 6 months, he had lost 3 pounds. We were all so proud! 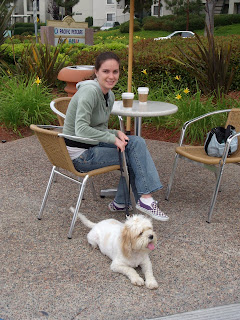 (That's my daughter out for a coffee with Sammy.)

Then we went on vacation. A very kind friend allowed Sammy to stay at her house. I gave her his leash, his bed, and his food with strict instructions: "Sammy gets 1 1/4 C. dog food per day ONLY." I got emails about Sammy's vacation: "Sammy's enjoying his daily social time with all the doggies in the neighborhood!" and "We're taking him to Mammoth for the weekend!" Life was good.

Maybe it wasn't all good. He chewed up a pair of underpants and the handle of a suitcase, and he made a couple of "mistakes" in my friend's beautiful, clean house. And when I picked him up, he looked different. "Did you get him shampooed?" I asked. "He looks so fluffy." My kind friend had had him washed. I was so grateful.

Unfortunately, the shampoo wasn't all that made Sammy look fluffy. He had gained weight. Another friend stopped by to visit. "Whoa!" she said. "Is that the same dog? How did he get so fat?" I know we were only gone two weeks, but in that time a lot can happen. His "waist" was gone again. And now, when we sit down to eat dinner, Sammy rushes to the table and sits, looking up at us expectantly. When I put his dog dish down for him, he walks away, disgusted. After just a short walk, he huffs and puffs a long time.

Back to Before again: 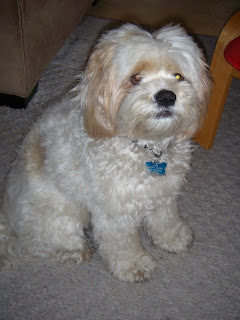 OK, I guess we all know what to do.

Posted by Sara Lewis Murre at 6:10 AM

You are going to be so glad you did this when your dog is older, and the chronic health problems that plague so many of our dogs do NOT happen to you!

My life is so much more improved since I started following Cesar's Way with the dogs that I actually started rescuing problem dogs about to be put down because of their problems and rehabbing them, then finding new homes for them!

I just transitioned my latest rescues to walking on treadmill without a leash! Further - my lab greyhound loves it so much that when the beagle got his turn, (they line up around the treadmill - rof) the lab got back on and I have a you tube movie of them walking side by side!

Thank heaven for the treadmill. We have had over a month of days over 110 degrees, and that means it never gets below 95 degrees~ even at 4am here in Phoenix!

One thing I found that really helps give value for the time and energy, is using a doggie backpack filled with 10-15% of the dog's weight in water, to increase the work out return.

I also use a child-sized bike. This lets me put my feet squarely on the ground and I am able to up the speed of the walk - it is easier to get them into the migration walk, where they dont get distracted so much!

So~ Good Job! The extra years of your dog life, will make you glad for your investment now!

Poor dog could be classified as a Yo-Yo dieter.

Good for you for taking such excellent care of him. I always feel sorry for dogs that are pampered with table scraps. It is like me indulging in a box of donuts - not good.