When you finish a new story or novel, it's like having a shiny new thing. You wake up in the morning knowing that you have something new, something really good that's making you feel happy. What is it? You check. "Is there a brand-new car in my garage?" you ask yourself. But no, that's not it. "Have I received a ruby-and-diamond tiara recently?" You find it's not that either. "Oh!" you say, remembering. "I have a new book (story, poem, essay, memoir, etc.). That's my shiny new thing."
Posted by Sara Lewis Murre at 8:40 PM 4 comments:

Here's a wonderful essay by Haruki Murakami in which he says, "Practically everything I know about writing, then, I learned from music." The same is true for me. While he learned from jazz, I learned from rock and roll.
Posted by Sara Lewis Murre at 4:54 PM 2 comments:

Did you watch the Live Earth concert yesterday? We did. Too bad we can't watch an all-day concert every Saturday. Like AFI and a few other bands, I'm vegan. But do they hang their laundry on a clothesline to dry or recycle their jeans to make purses? 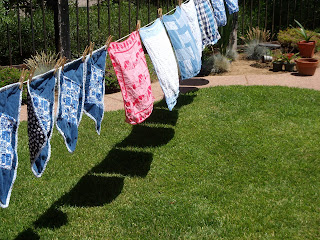 I went to the Live Earth web site and took a survey to determine my ECP score. It asked me how many miles per year I drive, how many hours I fly, what kind of light bulbs I use, whether I bring my own grocery bags to the store, and lots of other things. I got an "average" score. Average? But I am trying so hard! They never asked me about my diet, my laundry, or my purse. Do you think that would have made a difference in my final score? Either way, I have a long way to go apparently. I guess we all do.
Posted by Sara Lewis Murre at 6:30 AM No comments:

As you know, I listen to a lot of podcasts. Through iTunes, I subscribe to Fresh Air with Terry Gross on NPR. A lot of these interviews have to do with the war, the Supreme Court, and politics. Very valuable information, to be sure, but the ones I care most about are the interviews with actors, comedians, writers, filmmakers, musicians, and other artists. I always get something inspiring, heartening, or instructive from these people, even if they are working in a completely different medium. Yesterday, I heard something that reinforced my belief about how good it is for us artists to listen to other artists. Gross was interviewing Mary Weiss, former lead singer of the Shangi-Las, who has just come out with her first solo CD. Gross asked what it was that brought Weiss out of her 40-year "hiatus" from the music industry. And you know what Weiss said inspired her to sing on record again? It was something she heard Iggy Pop say on another Fresh Air interview! See? When we artists listen to each other, wonderful things can happen.

Later, I was in a traffic jam, and I listened to another Fresh Air interview on the radio. This time the subject was Carol Muske-Dukes, author of the semi-autobiographical novel Channeling Mark Twain, which is about a young woman who established a creative writing program for women prisoners on Riker's Island. Maybe you heard it. It's a good one with a lot of insight on writing and why it's important. A particularly moving part of the interview was when Muske-Dukes talked about what she'd learned from her own experience of teaching writing to the prisoners. She describes how writing became necessary for these prisoners' survival. I know you can relate to that. Today I'll get the download, and I'll listen to it again. I'm sure I'll get even more out of it the second time around.
Posted by Sara Lewis Murre at 9:08 AM No comments: 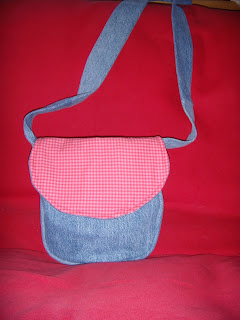 I had a short hiatus while my friend was reading my novel, and I made this purse out of some old jeans. I got the basic pattern here. But I added pockets inside and out; used batting; reversed the back, so it was lining-side out; and used denim, instead of corduroy. The back is the best part. 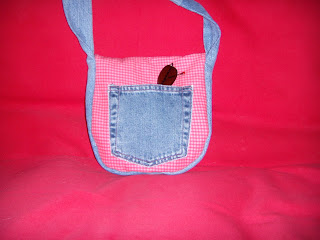 You can't see it here, but I took all the stitching out of the pocket and replaced it with pink stitching.

Now if any artists and/or crafters happen to drop by here, just remember as you look at this that I am writer. Oh, and that reminds me, I need to get to my revisions. I'll just read something good to get in the mood. 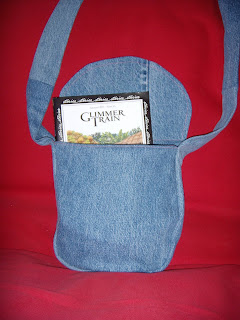 Is it hot where you are? It's pretty warm here. Here's a hot-weather alternative to the Crock-Pot. I make this salad in the morning, and it hangs out improving itself in the refrigerator all day.

Mix all ingredients and refrigerate for at least a few hours before serving. (Feel free to add two tablespoons of olive oil, if you're so inclined.)

Serve as a main dish, wrapping bean salad in lettuce leaves, burrito style, or as a side dish. This salad also tastes really good wrapped in a warm flour tortilla. Enjoy!
Posted by Sara Lewis Murre at 10:55 AM 1 comment: