Is My Real Life Based on My Fiction? 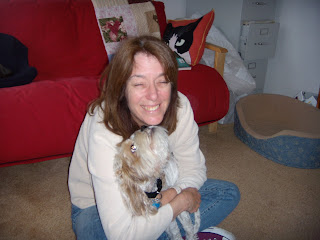 In January, I started a short story. As it opened, the main character was grieving about the recent death of her beloved dog. I don't think I've ever had a dog in one of my stories before, because I'm not a dog person. We have two wonderful cats that have always been everything we could want in pets and then some. Though I have never paid much attention to dogs, to my surprise, when I wrote about this dog, she came to me vividly, as if I had already known her for a long time. In my mind, I could not only see her curly black fur, but I also felt her placid, agreeable, affectionate nature. I had the sense of her always there in the background, a patient, good-natured companion as my main character worked, ate, slept, and drove around in her car. I went with the dog thing, of course, because it seemed convincing to me and expressed the heart of the story. A few weeks after I'd finished the story, I discovered it had more to say. In fact, the short story was just the beginning of bigger story, a novel about the woman whose dog had died. At first, the dog thing was only important in the opening scenes, and as I wrote more, I sort of forgot about her.

About a month and a half after I started that short story, our family decided to get--guess what--a dog! Honestly, I didn't really want a dog, but for a number of reasons, I felt it was the right thing to do. I knew I was going to be the one to take care of the dog. I knew it would take time and trouble that I could not imagine in advance. I knew all that, and still I went to the Humane Society with my family and adopted a dog. The dog is male and mostly white, but after a few weeks, it hit me that in all other regards, we had adopted the dog from my story. Just like my character's dog, ours has curly fur and a mellow, pleasant personality. He sleeps in my office while I work. When I go out, he rides around in the car with me.

Often I've written about a character doing something in a story, only to find myself doing it later in my life. The dog thing is yet another example. In one of my books, Second Draft of My Life, the main character, a writer, comments that people always ask her if her fiction is based on her life, but no one ever wonders if her life is based on her fiction. In my experience, the latter is more often true. I always wonder if other writers have this experience, or is it just me?
Posted by Sara Lewis Murre at 12:41 PM

Your little dog looks like he adores you. I'll be looking forward to your new book.

I spot a quilt on your sofa. Very nice!

Bonnie sent me here...I look forward to reading your blog. I'll be heading out to find your books too! :o)

Cool! I just found your new blog quite randomly, but I met you at La Jolla Writer's Conference last fall. I'll be adding it to my links for sure!

Congrats on working on a new novel, and also on being close to finishing it.

I think maybe writing about things we are interested in gives us the time to work up to actually trying them. Perhaps we are subconsciously wanting to explore that thing, and the writing brings it to the forefront.

Hmm....wonder what I'm about to try? Better go check my WIP and edit out anything that's just too scary! :-)